Concert of Lyravlos at the Corcoran Gallery in Washington

On Sunday, October 16th, 2005, a unique concert with reconstructed ancient Greek musical instruments, filled with magical music The Frances and Armand Hammer Auditorium of Greek style architecture, at the Corcoran Gallery of Art in Washington DC. The event was part of the Corcoran’s program “Celebrating Greece” and was organized by the Embassy of Greece, Office of the Cultural Counselor, in Washington, DC. 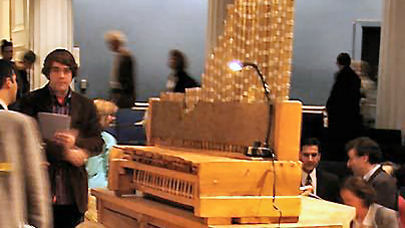 The Corcoran Gallery of Art, located next to the White House, is a major center of American and European historic and contemporary art.

The music was played by the “LyrAvlos Ancient Greek Musical Instruments Ensemble” who traveled from Greece for this performance. Panagiotis Stefos, the founder of the Ensemble has reconstructed most of the musical instruments based on scientific research, such as the ancient kitharis, lyre, avlos, seistra, tympanon, pan flute and sea-shells. Among these musical instruments from Ancient Greece, was presented for the first time in the US, the hydraulis – the first keyboard instrument in the history of world music and the ancestor of the later church organ. The hydraulis was invented by the famous engineer Ctesibius in the 3rd century, BC. It was discovered during an excavation at the ancient site of Dion, at the foot of Mount Olympus in 1992, by Professor and Archaeologist Dimitris Pandermalis and his associates. Scientific findings were followed in detail and a replica was fully reconstructed in 1999 by the European Cultural Centre of Delphi. The hydraulis is a simple, yet ingenious structure, which demonstrates the high level of technological thought, developed in the ancient Greek world. The audience received with enthusiasm and a standing ovation the rare ancient music and lyrics from 2nd century B.C. to 3rd century A.D., such as: Stasimon no. 1, an excerpt from Euripides’ ORESTES (5th century B.C.) with music by Euripides; Epitaph, lyrics and music by Seikilos (2nd century B.C.) and The Delphic Hymns (127 B.C.) with lyrics and music by Athenaeus (2nd century ?.C.) as they were originally found (Delphi Museum).

The program also included an Early Christian Hymn to the Holy Trinity (2nd – 3rd century A.D.) from the Papyrus 1786 Oxyrhynchus. The latest musical composition found in the ancient Greek Music System, Parasemantics. When they arrive, a poem by Constantine Cavafy (1863-1933) with music by Panagiotis Stefos and concluded with traditional Greek songs that refer to rhythmic and melodic elements from ancient Greek music.

LyrAvlos was represented by Panagiotis Stefos, who played the hydraulis, kitharis, lyre, avlos, pan flute, sea-shells; Christina Siaki who played pandouris, lyre, violin; Anna Chronopoulou mezzo soprano, percussion; and Michalis Stefos singer, percussion. The production of the concert was made by the European Cultural Centre of Delphi, that was founded in 1960 with the initiative of Konstantinos Karamanlis and the main goal to revive Delphi as a cultural and intellectual center of Europe and the world.

This magnificent concert was sponsored by the Hellenic Ministry of Foreign Affairs and the Greek National Tourism Organization. 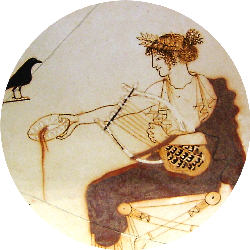 Contact to us have us present Ancient Greek Music at your place, in the form of a concert or educational seminar