Sources
of the Ancient Greek Music

t was believed that music was not particularly developed compared to other art forms in ancient Greece. This was due to the lack of written sources concerning ancient Greek music. Gradually, our knowledge of the role and the importance of music in ancient Greece were enriched thanks to the systematic research of all relevant sources. Thus, from lyric poetry we get lots of information concerning musical instruments while from literature or historical texts we learn a lot about prominent musicians of the time and their works.

A depiction on pots, mosaics, relieves, murals, coins and statues are an invaluable source of information

concerning musical instruments and their evolution from the archaic period to the Roman times.

Detailed pot decorations are a rich source of information concerning the form and shape of many instruments about which we would otherwise know nothing. Very few findings of instruments were discovered, mostly flute and rarely fragments of other instruments, such as the lyre.

Elements of ancient Greek music have also been traced in Byzantine and Traditional Greek music by researchers. The most valuable and important sources of information however, are detected and preserved in surviving scores as well as other surviving texts on harmonics such as the texts “Armonika” and “Rythmika Stichia” written by Aristoxenos Tarantinos – perhaps the most distinguished musician of the 4th century b.C.

The very few surviving scores however are fragmentary, for instance some inscriptions on stones, manuscripts on papyrus etc, therefore they fail to give a full idea of the wealth and grandeur of the ancient Greek music. This music reveals the sense of moderation and harmony which are important features of the Greek civilization.

All in all, sixty-one music pieces have survived to our time and if we exclude “Seikilos pillar” none of the surviving texts is complete. 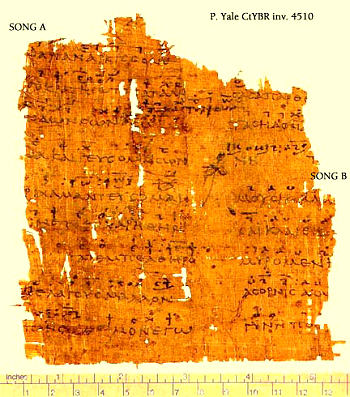 “Seikilos pillar” is the only preserved music text which was found complete. It is a small pillar which dates back to the 2nd century a.C. The poem, which is preserved and is inscribed on the pillar, talks about the true meaning of life and praises the art of quality living. It is a very small composition indicative of ancient Greek music and it is invaluable because of its uniqueness. The pillar is exhibited in the museum in Copenhagen.

The most important preserved text is the “Delphic Hymn”. It is inscribed on pillars and was found in Delphi. These invaluable extracts reveal important information about ancient Greek music. This hymn was presented during the “Pythia” in 128 BC. The pillars with the inscriptions are exhibited in the Delphi museum.