The studies of ancient sources reveal that the role of music in ancient Greece was far more complicated than that of music nowadays. Music nowadays is part of our everyday routine and a means of entertainment, there are, however, certain kinds which are considered to be the elite of music and are addressed to the initiated and the music-lovers.

Music in the everyday life of Ancient Greece

In ancient Greece music was an integral part of people’s everyday routine and due to the fact that music was a complicated form of art as well as a cultural expression, it was highly regarded and present in all private and public festivities. Music, Asma-the singing and lyrics – Orchisis – group of dancers as well as the song between the acts -were features of a highly civilized community as well as factors and indicators of a higher quality of life.

From the archaic period music gradually assumed a more complicated form and role, the result of this development was that special music competitions were organized in many parts of Ancient Greece. Some of the oldest music competitions ever registered are the “Karnea” in ancient Sparta which was a place were music was highly respected and connected with the training and education of the youth.

After the 6th century music played a significant role in two major festivities known as “Megala Panathinea” and “Megala Dionysia” and was a main reason for Athens to hold a prominent position in terms of cultural development. During those festivities, apart from the music competitions, some very significant kinds of lyric poetry and music emerged, the most significant kind of which was the Ancient Drama.

Except being an important element in both public and private celebrations, music played an important role on unpleasant occasions and it made daily hardships more tolerable. Music was a main feature in celebrations such as weddings, banquets, social gatherings and moments of joy but also a valuable companion in everyday routine. A flute player for instance would accompany the women with his music while they were kneading, the workers during harvest, the oarsmen as well as the soldiers on their way to battle. Music was closely connected with sports and athletic games not only because they included music competitions but because the music would encourage and motivate the athlete to achieve a better performance.

The divine nature of Music

According to the ancient Greeks, music was divine as it assisted in healing both soul and body. It purified and soothed people’s souls and it inspired, encouraged and helped them relax. The above mentioned 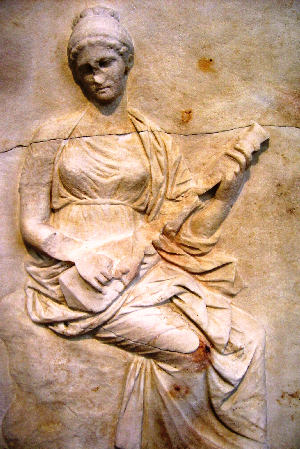 features justified the presence of Music, Asma and Orchisis in religious festivities such as the “Panathinea” held in Athens.

Music and other Art forms

Music is closely related to other sciences such as mathematics and philosophy thus it was one of the important subjects in young people’s education. Besides, its connection to the theatre and poetry was of major significance. Masterpieces of ancient Greek literature such as the Homeric epics and Ancient Tragedies were preserved thanks to music. It is an indisputable fact that music has made an invaluable contribution to the development and diversity of the Ancient Greek culture.