Musical Instruments
of the Ancient Greeks

We never have been interested in closing these instruments into a museum, nor did we intend them to be sold as souvenirs to visitors of Greece. They are fully functional instruments and they travel throughout the world, they are moving young and old with their history and sound, opening up horizons and giving inspiration to those who want to deal with history, music, mathematics, physics, language, theater, and, of course, the making of instruments.

THE LYRE: The most widely used and popular string instrument in Ancient Greece was the lyre as it was played not only by professional musicians. It was a symbol of Apollo and was not used in outdoor performances. It was the musical instrument that was primarily used as part of young

people’s education and could be characterized as the national instrument of the ancient Greeks.

PHORMINX: Perhaps it is the earliest form of the ancient guitar and was mainly associated with the presentation of Homeric epics and rhapsodies. It was considered to be a sacred instrument and perhaps the oldest string instrument.

KITHARIS: It was usually designed with a square base and considered a demanding instrument as it required skillful playing therefore it was an instrument for professional musicians called “kitharodoi” and was used in music competitions.

It is regarded as an improved form of the lyre. As shown in various depictions from ancient vases, etc, the arms and the crossbar are supported by a mechanism of plates ensuring the tension of the strings, most probably allowing also the musician to “lock and unlock” the crossbar, so that by turning it to change the pitch of all of the strings at once. The left hand through the sash (like when playing the lyre), selectively touched some strings in order to stop their vibration after a pounding. The (Classical period) strings of the guitar and the lyre were 7 or 8.

PANDOURA OR PANDOURIS: It is a three-stringed musical instrument and is considered the ancestor of the lute. It was also known to the ancient Greeks as trichordon (three-stringed).

AVLOS OR DIAVLOS: It was one of the most significant ancient Greek 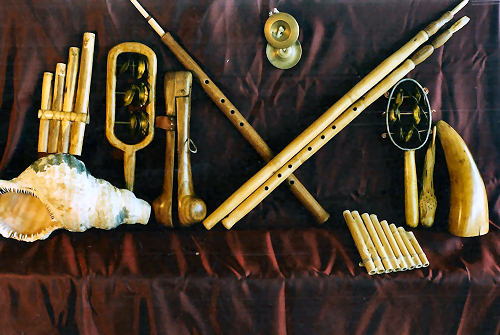 wind instruments used in almost all the private and public ceremonies, in national competitions, in processions and in tragedies. It was connected with the worship of the ancient God Dionysus.

SYRINX: A wind instrument of humble social status as it was primarily used by shepherds and was connected with Pan. The syrinx was made of reed and was also known as Pan’s syrinx. It was not used for artistic purposes.

After many years of exhaustive research of all kinds of sources, the construction I propose was mainly based on the detailed descriptions we have from Heron and Vitruvius as well as on the two specimens of Hydravlis discovered in the excavations at Dion of Olympus and Aquincum of Hungary respectively. It is the first polyphonic keyboard in history, the ancestor of the present ecclesiastical organ. It was built in Alexandria by Ctesivius (3rd century B.C.) considered as the founder of the School of Alexandrian Engineers (Museum) and father of the “Pneumatike”, i.e. the science that deals with air (pneuma) and its uses. He is best known for three achievements: the depressing suction pump, the hydraulic clock, and the hydraulic musical instrument. With a long and continuous presence (Ancient Roman Empire, Byzantium, Roman Catholic Church), Hydravlis and later the ecclesiastical organ contributed greatly to the formation of the great structure of Western polyphonic music.

TYMPANON: Like most percussion instruments it was not used only for producing music but also in religious ceremonies and worship. It was an instrument primarily played by women and was mainly used in religious worship such as the Bacchanalia.

KROTALON OR KREMVALON: Percussion instruments which were the wooden equivalent of the modern castanets. They were used by women to keep the rhythm for the dancers.

KYMVALON: It was made of metal and was the metallic version of krotalon. It was primarily connected with Bacchus worship. It was of Asiatic origin and despite being used, Kymvalon was not considered an important instrument.

SEISTRON: It is a percussion instrument probably of African/ Egyptian origin which, due to its strident sound, was used to accompany in performances or to keep a certain rhythm.

LyrAvlos uses authentic, reconstructed, musical instruments at concerts, special events, educational seminars, and in general at all of its appearances

The Reconstruction of Authentic Instruments