LYRAVLOS is an ensemble which mainly focuses on ancient Greek music and ancient Greek musical instruments. It can create, in a particularly flexible and inspired way, the musical background of events and provide suggestions for more specialized and demanding ceremonies. The originality of the sound of the instruments creates a highly evocative and atmospheric sound environment. 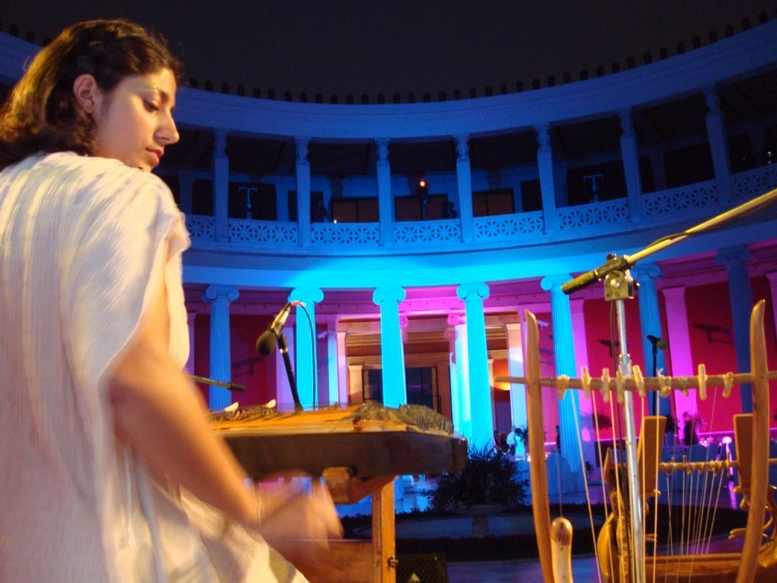 This would provide an original and interesting suggestion for organized events such as conferences, inaugurations etc.

It could be an interesting choice in organized events of ancient and modern poetry, where lyrics and music are combined, producing a unique result in which the focus is on theatricality and high esthetic. It could blend excellently in Ancient Greek Drama performances and other theatrical plays or activities such as artistic or athletic events etc.

LyrAvlos, which is characterized by a strong artistic sensitivity as well as scientific accuracy, focuses on the reconstruction of the ancient musical instruments and aims at promoting the Ancient Greek Music Heritage. Realizing the responsibility involved in such a task,

LyrAvlos has particularly insisted on accuracy and high esthetic. Therefore, in every public presentation the main priority is to present the instruments. The power of the music produced as well as its theatricality is the main feature. Knowing that it is difficult to represent a well-founded and esthetic result that can support the significance of the music and not betray it, LyrAvlos tries to avoid the superficiality of the common images of Ancient Greece in terms of stage and costume designing.

There have been organized events however, where a more complete representation is required. In such cases the ensemble consults the costume designer as well as the stage designer and the choreographer so as to achieve a result that corresponds to the quality of the music created.